It’s added in as “experimental” in the sense that things are not - yet - super optimised for it but it does work and it’s as “an extra” in our game engine.

It’s quite playable and it’s all OpenGL based, if it does happen you have that game you can try now the BETA and see how it works.

Overall we plan to continue to support Looking Glass for all our future games however “as soon as possible” I am planning another “technology migration” I have future plans to ditch OpenGL in favour of Vulkan and re-make a “totally new custom Vulkan driver” for our game engine with specific emphasis on VR and LG.

There was this short video we done some months ago

Overall we are still very happy about LG and we want to continue to support this technology.

This looks fantastic! Just bought it and switched to the beta channel.
I’m having trouble getting it to run on my machine - selecting “Looking Glass” and setting the resolution to 2560x1600/ fullscreen doesn’t seem to do anything - I get the game in windowed mode and there’s no lenticular shader being applied.
Rest assured that I was very careful to ensure that the calibration + drivers were not the problem.

If it makes a difference, I’m running the “fast” Windows insider preview. Will try on another machine shortly…

Hi,
I think there could be some problem IF your looking glass is NOT the “primary display device” or sorta, the code I used tries to basically looking for an ‘id string’ but look I am literally using this sort of stuff

But I think i’ve seen a few times that unforuntately “that strings” never contains any of those info.

Try to mess up a bit with monitors, it’s still a beta and no should NOT go “full screen” I mean just leave it as “Looking Glass”, maybe try to remove the fullscren flag.

It’s BETA … but once it starts it should go ok, I’ll check a bit more later this afternoon.

Yep, the GLFW monitor name strings are, as far as I can tell, a bit of a lie. On macOS they return the values you expect (“LKGxxxxxxx”) but on Windows they return something like “\DISPLAY1” or some such; it has to do with the way the displays are enumerated in the registry.

FWIW, I could not get the window to go fullscreen, or the lenticular shader to appear, with any of the following configurations (all of them with resolution set to 2560x1600, websocket driver verified enabled, “Looking Glass” button used to launch game):

I’ve been working on a way to consolidate these kinds of issues basically ever since we last corresponded, and there are some new developer tools in the pipeline very soon that I hope will help to resolve a lot of these exact issues - hopefully ultimately we will be able to abstract away the headache of calibration and windowing (both of which have been irritating us ever since we released the first few versions of the SDK) as much as possible.

So, you can expect this project to be released shortly – it’s an RPC service through which you can request both calibration and window coordinates.
In the meantime I really want this game to work reliably, so I can share with you something I worked on as a potential stopgap measure: here’s a modified version of the calibration load executable that exposes window coordinates of the Looking Glass display; you can find them by launching the exe with -m flag from the command line.

Hi,
you may be right, I suspect “something changed with some WIN10 update” I found out my code has a small problem I already corrected I’ll have soon to put up another beta.

I am finding like I have to re-install the driver any time to get it working, otherwise it’s really like the driver is NOT running and I get a “refused connection”.

Still, after I finished and got all the string and I perform

which appears to be ERROR_WINHTTP_CONNECTION_ERROR

Despite correctly receiving the string such as

So I had to modify the code to ignore that error message, still it would appear that I need now any time to re-install that driver to have it working.

Also, how comes I CAN NOT see that thing in the “Services” ? I have to way to see if it’s running or not ?

Yup, well, the requirement for a websocket connection to access the USB devices is because browser-based applications can’t natively access the hardware (in theory, WebUSB will change that).

The structure of the websocket driver is as follows:

Here’s one more explainer of where the various calibration load executables are located and what they do. 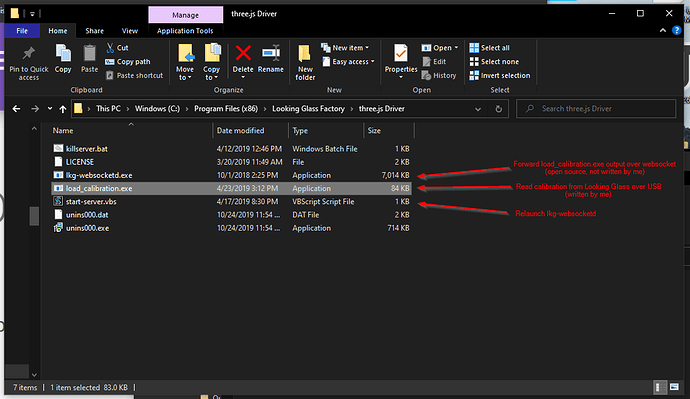 Hi there,
FIRST of all “I want to make it clear we/I did NOT abandon Looking Glass”, quite the contrary BUT we been literally “overloaded with other work”.

To make it short ( you can have more details of our day-to-day doing by following Jeff’s twitter @llamasoft_ox ) I’ve been finishing another game that was supposed to come out on PS4 but will come out on PC/Steam first called “Moose Life”.

This, for “compatibility issues” is based on OpenGL/OpenVR it performs “quite so well” I was thinking in a future to add support of LG but a first quick test … “eh rendering 43 frames are quite bit” wasn’t super promising … however it’s another of those things “set aside for the future”.

The other thing is, no mystert that much so far, we are working on a totally NEW engine/synth for VLM 4.0 ( Llamasoft Lightsynths ) which is "a complete new evolution of all that in VR ) and is totally Vulkan-based.

I became “a Vulkan adepth” I am now “all Vulkan” I wear a Vulkan t-shirt, I am “obsessed” in “getting the max frame rate/performance I can ever get” … so far working on/for Oculus Rift / Quest but “I do have plans” for “further investgations/applications into LG”.

Problem is as a “small indie developer” ( we are still and only in 2 people ) you are often between the “what I’d be nice to do” and “something to pay the bills at least a bit” so it’s a juggling of times and resources act.

Say that I’ll keep saying that “I LOVE Looking Glass”, I wish I could afford the higher res version but maybe one day, I’d be also curious at some point to try our newest VLM 4.0 thing on it becuase “I have absolutely NO IDEA how it could look like”

So yeah “all BUT abandoned”, the LG is always here on my desk and I am thinking “yeah can’t wait to try this/that now that I know more about Vulkan”.

Also “another of those thing that just came out” … looks like “finally” some people decided to start usign OpenXR, the new “standard” by Khronos … which means I will have to have a look into it as well … so “even more time that goes”.

Yeah also that SW “has a bit of bugs and things” that I am probably going to fix soon as well as I fixed them for “Moose Life” ( the new game soon to come out on Steam ).

Anyway I’ll try my best to put a bit of “more love” for the LG the fact is “now that I know a bit of something about Vulkan” LG “deserves a special treatment by its own” and a bit of experimentation.

Hi @GilesGoat - we’ve been trying to alter our approach to our dev tools along these lines, your experience working with our original (now deprecated) C API was a big part of that. We have a new version of this that is meant to be much more minimal and transparent, you can check out the documentation for that here. I’d be interested to hear what you think!