Here is the prefab. I do not have a viewer right now, I hope someone can try it out and tell me if it plays on the new Looking Glass. I suspect the ‘flip’ option in my prefab.

It works for a background scene. In default settings the trunk of the tree is at ‘zero’ in the sweet spot taco, with some foreground ground and lots of background benches and people. The whole thing has a ‘fake depth’ in the shader so all normal components play in front of it. Due to clipspace z madness this effect only works in the viewer; in the scene preview it tends to look like a plane object in the middle of the scene. 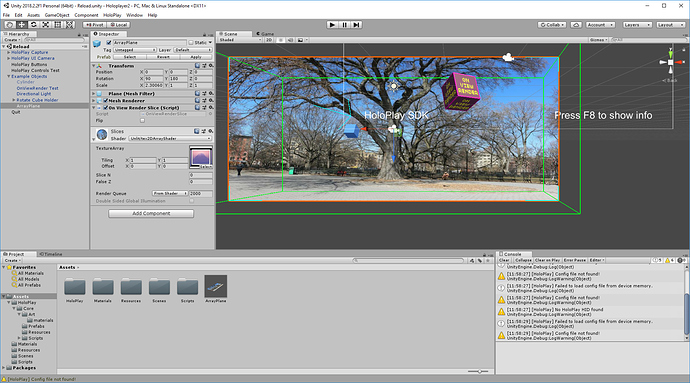 I just wanted to say that I had a chance to try this asset out and it works as described. Nice work.

I’m not 100% sure what the Flip option is supposed to do, but I prefer the option to be off.

I’d love to hear more about how you made this. A tutorial on creating similar scenes would be excellent.

Thanks for checking it out. I developed the asset for a modified holoviewer, which presents the scene from the other side of the lenticular. So the flip option is for whether the viewer has been modified or not.

There is quite a bit to preparing the slices from photos. I have heard of elaborate super stable optic table type photographic rigs, and I think some of the Holo team have built up a camera on a rail which could work.

This particular scene had a handy hexagonal grid on the ground which we used to place the camera at evenly spaced positions (17 or so, I think. Could better have been 32, in hind sight). If you look carefully, you can see a white coffee lid on the trunk of the tree. Each shot was centered on that.

I used Hugin pano-tools to align each shot exactly. Cropped them, then used slomovideo to interpolate frames to get 32 different views from the 17 actual ones.

Import into the textureArray was a bit of a hard-coded hack, but the final asset I like ok.

Holy crap! I was just impressed that you got it working with a custom shader and nothing to test it on. I hadn’t considered the manual legwork.

I haven’t published what I’m working on but I’ll try to share it. Hopefully you’ll like it. Thanks so much for the genuinely interesting backdrop.

Yes. Hope to see what your are doing too. Especially if you use the backdrop. That would be awesome.